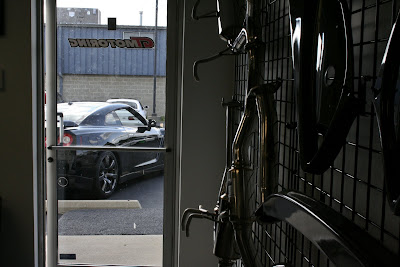 So, we got a pretty late start heading up there because pretty much all of us woke up late. When we met up at Jamie's, Michio, Tommy, and Tym washed their cars, then we went to get gas, then swung over to Chobs house to pick him up, and then to another gas station. We ended up spending more time driving there than actually there, had to park in the back, and missed out on a few nice cars that showed up and left earlier. But with some really nice weather, free food, and some quality people and some (for the most part) grip cars still around, GT Motoring's BBQ was a good time. Big ups to all the homies that came out, good to see ya'll and to finally be able to drive my car again.

Later that night Young and JC swung over by Michio's for a little garage session consisting of some drinking, chillin' and pulling out Michio's rear portion of his interior.

The last picture was taken before things were completely finished, but good shet nonetheless.

Oh, and one last thing. If you've been under a rock or something for the past couple weeks and haven't seen the latest video(s) by T2 Films, you've been mega missing out. Not only is his work consistantly out of control, I'm pretty sure this ranks up there for best material yet. So peep this shet, right quick: